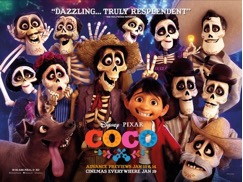 ‘Coco is one of Pixar’s most visually ambitious worlds yet.’

I have been under the sea with Finding Nemo, into the mind with Inside Out and now I have been discovering the land of the dead with Disney and Pixar’s latest creation, Coco.

Coco follows the story of a Mexican boy, Miguel, on his journey into the colourful, neon-lit land of the dead and has a combination of humour, music and emotion. Miguel’s dreams of becoming a musician are squashed because his family have banned music for generations. Miguel strikes one musical chord from the guitar of Ernesto de la Cruz, his idol, and finds himself amongst an unlikely acquaintance and his dead ancestors. Whilst on his journey to get back to his own world, he discovers the importance of his own family history and his dreams of bringing music back to his family.

Sounding familiar? Many people may have seen Reel FX Creative Studio’s Book of Life, 2014, distributed by 20th Century Fox, which has a similar storyline, but Pixar have made this story their own by using aspiring new actor, Anthony Gonzales, aged 12, to voice the main character, Miguel and the voice Gael Garcia Bernal, as Miguel’s ally, Hector.

Pixar Animation Studios normally works tirelessly to create new worlds that have never been before attempted in film history; in previous films, such as Inside Out, they have allowed the audience to tap into their psyche and connect to the characters and emotions within the films. However, in Coco, they have revisited the traditions in Mexican culture, something many of us might already know something about, and bring it back to life in a way that only they can.

Let’s face it, within each Pixar release, we are wondering how they could possibly top the last; but they always do. So, let your mind wander, as for less than two hours you are taken away from your standard PG film, to a place that is attractive to the eye and enhances the CGI effects that we have come to expect from Pixar’s previous creations.

I would highly recommend this film for the whole family, as it captures the imagination. Coco is visually vibrant and full of life, with a captivating storyline and an innovative twist. Visiting the land of your ancestors has never been more inviting and it teaches us, the audience, to never forget the ones we love once they have passed from this world. Pixar has yet again, produced a fantastic animation, adding to their ever-growing legacy of classics. Coco brings a breath-taking vision of colourful Mexican boroughs to life on the big screen.