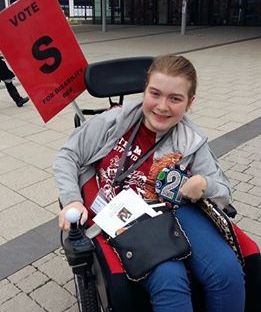 In around March time last year, I received an email, regarding the vice president role in Media and Communications in the student elections 2017.

As I’d showed interest and was apart of Demon Media they wanted to bring the role to my attention.

Curious, I glanced through the student union website to read through this role and the roles in the upcoming student elections that we could run for.

Reading through the president of Media and communication role, I found it highly interesting and appealing as the elements that I would be responsible for is all things I like and am interested in.

However, it was a full-time position and if I ran for it and was successful, I would be acting the position in academic year 2017/18 which would mean I would be doing it amongst year two at De Montfort University.

Thinking practically, I would be very busy with coursework and presentations and I feared that if I took on this full-time role, I wouldn’t be able to fulfill the role properly or complete my coursework to a high standard.

About to disregard this role and my place in the elections for this year, another role caught my eye. ‘Part – time Disability Representative’.

Having suffered from Cerebral Palsy since birth, I have been through a lot and found myself in some difficult situations.

Instead of rolling over and let it defeat me, I have tried to be positive and make the best out of a bad situation and I say I have become wiser and a stronger person because of it.

When I saw this role was available to run for in the student elections, I felt pleased that the university was highlighting it, allowing us as disabled students to be represented equally within the university.

Reading about what was expected of the successful candidate, I became more and more interested. I’m not a saint in anyway and I’m not perfect, but I felt I was a strong candidate for the role and I could showcase my knowledge and somewhat expertise in the role to be an effective disability representative.

Looking below the description of ‘Disability Representative’, I saw nominations closed that Friday and being Wednesday, I had limited time left so I threw caution to the wind and decided to apply for this role, using the words ‘EQUALITY SHOULD BE A RIGHT – NOT A FIGHT’ as my slogan for my campaign and for life.

Thinking about everything I could bring to the role, I wrote this manifesto:

I’m Sophie and I am currently studying Creative Writing & Journalism.

I have a bubbly and happy personality and I am a very sociable person, who is well organised and am always up for a challenge.

I currently have my own blog and enjoy writing in my free time.

I have Cerebral Palsy, which has left me in a wheelchair and affects three out of my four limbs.

However, I don’t let the restrictions hold me back and strive for the best I can.

As I have Cerebral Palsy, I have an element of understanding of what students with different disabilities require.

I am well focused and feel I can communicate effectively with the students and the SU in case students are anxious to approach themselves.

I can provide transparency and stand up and voice our rights.

Being in a similar situation, I can provide a sensitive ear and advise them properly, without them feeling patronised at all.

People have approached me in the past and recommended I went for this role as they think I’d be good and an inspiration to others.

I feel I can enforce the message of equality within the university and get those with disabilities more confident and more involved with the happenings of the SU.

If I was elected I would:

Submitting my nomination, I was now a candidate for ‘Disability Representative 17’ running in the upcoming student union elections.

In the weeks leading up to election week, I attended various meetings which contained important information all candidates needed to know for the elections.

I also had to have several photographs taken of me to accompany my manifesto and to appear on the student union website.

Ahead of campaign week, I created posters, signs and a social media campaign to spread my manifesto and my aims if I was elected.

I was sure to create different types of portrait posters to try and target different students.

I created large posters with bold, large text which I tried to put up all over university to spread the word as wide as I could.

The bigger posters had a big photo of myself with this text in bright colours.

IN THE STUDENT UNION ELECTIONS

Alongside these larger posters, I also created mini posters containing my candidate information in which I could hand out to potential voters during the week.

These smaller posters included a photograph of myself, bold words, signifying who I was, the role I was campaigning for a short paragraph stating why they should vote for me.

Beginning this campaign week, I had a sign made which I wedged in the model of my chair and stood in the middle of campus and handed out posters to students walking through campus, handed out leaflets and encouraged people to vote for Sophie Abel for Disability Representative in the student union elections.

I was out there all week for as long as I could, handing out leaflets and speaking to as many people as people as I could about why I would make an effective Disability Representative for the university and how I can benefit not only those with physical disabilities and help fight for their sides.

Also, how I help those with mental disabilities or disabilities that cause them to struggle in the classroom such as Dyslexia, with their coursework and lessons.

For example only with both parties permission would I speak with tutors on the student’s behalf and discuss whether there would be a possibility of getting them an extension on their deadline or another form of help that they could have so they could get a better grade.

As I have said before, and will do for the rest of my life, disabled people, physical and mental, slightly or more so are as capable as everyone else and should not be ridiculed under any circumstance.

We can achieve the same as anyone else if given the chance.

Someone only needs to look a little closer and take the time to get to know that person and make sure anything is in place that they need.

This is what I wanted to show in my campaign.

I was sure to speak in depth about my aims in depth so voters understood everything I was campaigning for and what I would do if I was elected as Disability Representative.

Meanwhile I set up a social media campaign to act along side the rest of my campaign which I think worked well.

It was a hell of a busy week. I was constantly out on campus, giving out posters, speaking to people, trying to get votes, going into classes to tell people about my campaign.

I also went to a few societies and clubs to try and them to vote for me, it was crazy but one and one I wouldn’t of missed for the world.

I had a great campaign team that really helped me, I am really grateful to them.

I also met some great people, both in my category, running for the position as myself, but also students running for different positions in the student union.

Though we were all running up against each other in some way, we all aiming to make De Montfort University a better and happier and enjoyable environment to learn in. I made great friendships that week which I will remain friends with.

Coincidently, the week of student union elections, it was my 21st birthday. Having my birthday in election week was incredible. A true buzz and it made my birthday even more special.

At the end of the week, a results show was held, broadcast live on Demon TV and Demon FM.

As each result was announced, I became more anxious about the announcement of the results in the Disability Representative category.

When the results were finally announced, I was amongst three other candidates who was campaigning for the same position and all together we had got 1519 votes. In the first round I got 532 votes.

In the second round, I got an extra 43 votes, giving me a total of 575 votes, putting me in second place.

I was quite disappointed that I didn’t win, but I learnt some amazing skills and made some great skills.

Also, I felt comfort in this only being my first year at De Montfort University and my first time campaigning for this role and there was also next year for me to try again next time.